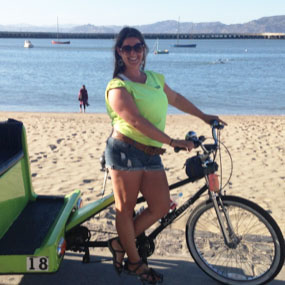 It takes a sharp savvy to bring the news of Coaster Pedicab to the world.  Fortunately, Cameron has more than six years experience in public relations for both large corporations and small businesses in all industries including tech, retail, education and of course, pedicab.  Currently, Cameron manages our media and marketing.

She began her career at Burson-Marsteller where she spent several years producing media coverage for major corporations such as Intel and HP in publications like The New York Times and The Wall Street Journal. Following Burson-Marsteller, Cameron was recruited by the founder of SMB Companies to lead the public relations arm where she primarily worked on small business clients. It was here that Cameron honed her media relations skills for niche industries like pedicabbing where she garnered coverage in large publications like The Washington Post and The Boston Globe to industry-specific publications like Outdoor Advertising Magazine.

Cameron has been intimately involved in the pedicab industry since 2010 and has had the pleasure of pedaling a Coaster pedicab in cities on both coasts from Washington, DC to San Francisco. A true sun-worshiper, Cameron graduated from the UC Santa Barbara with a bachelors in sociology and now resides in sunny, Oakland, California where she spends her time enjoying the outdoors, typically on three-wheels.

Head back to the team page ➜